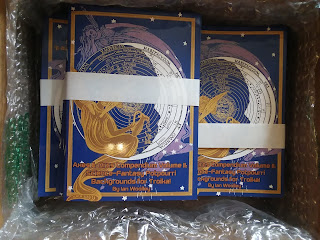 I got my order from Mixam Wednesday or something. Now that I have them I can do a comparison between them and the two primary Print On Demand services, Drive Thru Rpg and Lulu. These are with nearly identical files, and none of the images were color corrected in anyway and were set in RGB not CYMK.


Color wise I have a hard time distinguishing between Lulu and Mixam; however, Lulu's saddle stitching is cocked and the trimming isn't as nice with either of the two Lulu proofs. And while there is a marked and quite horrible difference in color, DTRPG's saddle stitching and trimming is nice.
Mixam is also massively more flexible with the weight and finish of the paper. What I ordered is comparable to Lulu's Premium Full Color. And DTRPG paper has roughly the same finish across the three proofs.

Pricewise, Lulu has 2-3 times the base cost of either Mixam or DTRPG.
Ease of use for a total novice, Lulu is the easiest with DTRPG being the biggest pain in the ass barring some wonkiness I had to correct with this Mixam run.
The biggest down side to Mixam is that you have to buy multiples and do your own distro, so you have stock sitting around, unlike with POD.
The biggest upside to Mixam is that past the base price, which is very very likely to be below that of DTRPG is that you don't have to give anyone a cut, unlike the 30-35% cut that DTRPG takes.

So if you like what you see, you can go here to order a physical copy for US side people.


Melsonian Arts Council will be where you will be able to get it if you are in the rest of the world.
And if it needs saying, boilerplate "Obligatory please don't hunt me down and feed me to the ghoul-bears text: Axes &
Orcs Compendium: Volume Two: Science-Fantasy Potpourri Backgrounds is an independent production by Ian Woolley and is not affiliated with Melsonian Arts Council."
at September 06, 2019

As is my wont, I browse Itch and DriveThru for new Troika! third party products to add to my list of 3pp resources. I see a new adventure ...