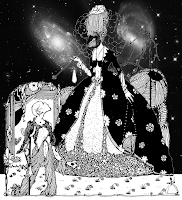 So I was making fun of Product Identity monsters on twitter the other day, and I noticed that the Mini Monster Jam on itchio is still going. So I've brainstorming some monsters kind of like them.

It's PWYW until the jam ends. If I remember.

I'm also selling these entries singularly on Drivetru. After I have enough make it worth doing print I'll bundle the pdfs up etc.

Number of Party: 1, 2, or 5d10 (a Ball)
Level: 5 to 10
Armor: Unarmored or Dressed For a Ball (as leather or mail)
Movement: As a normal person or two-thirds a normal person if Dressed For a Ball
Attacks: Opium pipe (as a black-jack), or masquerade mask (as a club), or Sword, or Radiant Pistol (as any variety of crossbow)
Special attack: Once every 1d4 rounds they may, if smoking, exhale a precisely conical cloud of vapor 60 feet in length and diameter at its greatest. All non-nautilium must make a saving throw to resist the intensely languid euphoria. Failing will render the creature confused and sluggish for the next Exploration Turn or ten minutes.

These well-dressed folks hail from the stars. They are an aristocratic people. Extremely charming to anyone they perceive as being their equals or betters. However, for the most part they consider all non-nautilium to be useful servants at best or conveyances and food at worst. For you see, these celestial sailors dine upon all manner of mammalian organs, especially brains. And it is through their horrendous appetites they can conceal their deep secret. That they are actually small nautilus-like creatures from the star that through their superior medical science can gain control of any headless mammalian body, preferring those of humans and similarly shaped creatures.

Their cultural manner of dress is similar to 18th century European aristocracy cut from wondrous metallic fabrics. Those appearing to Ladies will always have a either a mask (1-2) or an opium pipe (3-4) or both (5-6) in or close at hand. Those dressed as Gentlemen will always have a Radiant Pistol with 6 shots and a finely made sword made of mother-of-pearl. If 50% or more of the Ladies present have masks then an equal number of Gentlemen will have them as well. Naturally, if a Party of nautilium have infiltrated a human or like creature ball or courtly affair, all will be carrying and using masks.

Nautilium
You're a well-dressed aristocratic sailor of the stars. Extremely charming to anyone they perceive as being their equals or betters. All non-nautilia are servants, conveyances, or food. You are actually a small nautilus-like creature that can gain control of any headless mammalian body, preferring those of humans and similarly shaped creatures.
Possessions
Opium Pipe
Fan (club) or Pistolet
Fancy Dress (moderate armor)
Case of Calling cards
Mask
Advanced Skills
1 Pipe Fighting
1 Fan or Pistolet Fighting
2 Smoking
2 Gambling
3 Dancing
1 Chirurgery
1 Nautiloid Sailing
3 Etiquette
Special
You prefer to eat the organs of still living vertebrates, and can giving the proper tools attach yourself to the neck stump of any vertebrate and operate it as your own body.
You can exhale opium, or other smokeable smoke, from your pipe in a perfectly conical cloud, spending 3 Stamina and requiring all within to make a luck check vs Smoking or be struck extremely languid, slow, and essentially out of combat for about 10 minutes.

As is my wont, I browse Itch and DriveThru for new Troika! third party products to add to my list of 3pp resources. I see a new adventure ...