The BECMI line of D&D introduced all kinds of new character class options beyond the seven in the boxsets. Among them were a series of books, the Creature Crucible series, that introduced new locations in Mystara, and more pertinent to this, monsters as player character options. However, there are many acknowledge problems how they implemented them. Many of them start at negative levels with negative experience totals and one or two HD working towards the normal monster level (level 0) instead of starting at level one.

The pegataur is not as egregious of a mess as a PC class as the sphinx is, requiring a more reasonable 20,000 exp to go from negative 3 to normal monster level (level zero), but still negative experience totals make sense only if you consider the base monster stats as level-0. It is also a linear progression until level "two," unlike the core classes.

While I gave the sphinx a similar exp progression to the elf with an additional amount per level to account for the additional abilities of the sphinx, I do not place much extra value to the flight of either class in a Serraine campaign, PCs can be assumed to be airplane pilots in the same campaign. Airplanes outclass most flying monsters in general, and do for sure outclass the PC options. Likewise, I do not place much extra value in the delayed spellcasting progression of the pegataur, with default casting ability of a 1st level elf at 5 HD.

In Top Ballista pegataurs could choose to become a wicca, later renamed to wokani (because wicca was offensive to neo-pagans?), or a shaman in lieu of elf spellcasting at 5 HD. I am not sure as why wicca would be an appealing option with its more restrictive spell list. This is in addition to the extra ability score requirements, extra experience, and ability checks to even become either. Sticking with the initial idea of wicca/shaman as extra options, is why this rebuild has the option of using the spell lists of cleric, druid, or magic-user.

There are also some pegataur specific jousting rules? Wholly unnecessary, use your own.

You can buy this and my other OSR classes in pdf here. 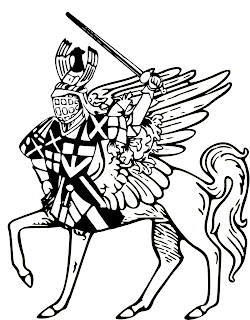 Pegataur Monster Class
Ability Score Requirement: 9 Strength, 9 Intelligence, 9 Wisdom
Hit Dice: Id8 per level up to 9th level. Starting with 10th level, +2 hit point per level, and Constitution adjustments no longer apply.
Attack Progression: As a fighter.
Saving Throws: As a fighter.
Armor: Any barding at double cost and encumbrance.
Weapons: As a fighter.
Special Abilities: Flight, natural AC, hooves, mid-level spellcasting, use elf spell progression (one of cleric, druid, or m-u spell lists), two hoof attacks (1d6 each), base AC 5(15).
Pegataurs have fucking elfin/human torsos with a winged equine body from the waist down. They are generally insular people with the bulk of their external dealings being as mercenaries. "Normal" pegataurs will only contract out as groups, never singularly. The pegataurs of the Wondrous Flying City have lived there so long, ever since its founding  when a large enough unit was contracted for a very long term, and being in such long-term close proximity has given them a less insular outlook. They still keep to themselves in their quarter of the floating city, but it would not be unusual to see singular pegataurs looking at home in mixed company.
A pegataur has a base movement of 180'(60') and a fly movement of 360'(120'). Aerial Combat stats are: Air speed: 120', MF & Takeoff: 3 (b), Carry 100 lbs per Level.