In light of the most recent update on the status of RRT, which should never have had such a short target date in the first place, and also fell victim to its own sucess, I am now able to make some less tentative plans with regards to the minis I will be getting. Wave one will contain most of what I wanted, or at least enough of the VF-1s that I can use them as PC valks, and is supposed to be good by the end of June.

Assuming that late July is a good target to expect them, and allowing for both assembly and painting, and that autumn will be my final quarter at UWT, I'll be graduating with a BA in Interdisciplinary Arts and Sciences: Art, Media, and Culture, I am planning on starting a series of short arcs in the vein of the 6 episode OVA format of some anime that will roughly parallel the events of SDF Macross (and the first season of Robotech) but with the addition of parts CthulhuTech's background. I feel that unlike my usual hands-off approach of just presenting my players with some shit to do, that since my home group is as a whole anime fans that it would acceptable, and enjoyable, to have something of a rough plot-line sketched out.

Things I will have to consider are how strongly I want to hew to SDF's plotline, how strongly I want the players to play VF-1 pilots, and how to integrate different character types should I feel that having a variety of character types present without making anyone PC have too much spot-light (which I will probably do because it would probably less cool to make everyone play pilots).

I will be using Basic Roleplaying, with BRP Mecha (obviously), with background materials from CthulhuTech (and maybe some stuff converted), some things from Call of Cthulhu, possibly some things from Ringworld (because I got the books for it, and it's SF BRP). There is a possibility that I will heavily modify some random character gen tables from the most recent Palladium Robotech books to help speed up chargen.


Also, tomorrow marks the first day of the D&D 40th Anniversary Blog Hop Challenge and is the first time I do one of these silly blogging memes.
at January 31, 2014 No comments: Links to this post

This is a bunch of shit scraped from my tumblr about my ideas for a really stupid anime campaign. The purpose of this is mainly gather all the stupid in one spot so I can look at it all at once. A secondary purpose is so the blogger and G+ RPG communities and see my shitty ideas and talk about them.

I actually envision this being most suited to the weird episodic nature of some long running animes.


In Gurrenvangelion, the team defends Portland-5 from Space Juggalos that inexplicably invade once a week to assault it with shitty music. The only way to fight back is with giant song and dance pop star mecha piloted by teenage pop star pilots.
Season two gets weirder.

Season 2 also known as Attack on Gurrenvangelion:the Safety Dance Has Been Canceled:the sequel:the Roleplaying Game, involves defending Portland-5 from a new threat. This time from beneath the sea.
An evil organization that rocks under the sea.
Glamorous and metal and snorky they be.

The as of yet unnamed season 3 of Gurrenvangalion

I really need to stop thinking about this entirely too stupid and over the top mecha and popmusic fictional anime, but I am already plotting out the 3rd season of it, because it will have a meta-plot and plot arcs unlike the first two season.

I think I may have to start writing fanfiction for Gurrenvangelion involving Eren jaeger as the front man for a death metal band, and Shinji Ikari as the student of ballet choregrapher backup dancer for the death metal band.

Damn it now I’m thinking about the Dai Gurren Brigade as a synth-pop group, the Survey Corp as death metal group, and the Eva kids as a pretentious Smooth Jazz group.
It’s bad when what is essentially the fanfiction equivalent for a campaign setting ends up making you think about fanfiction of it.

And now some visual and musical inspiration after the break

Dungeons and Dragons and Dyscalculia

I have a friend with dyscalculia. I got her to play D&D. She told me that she has had other friends who play D&D that have told her that she wouldn't like it, or some other such rot.


Dyscalculia is difficulty in learning or comprehending arithmetic, such as difficulty in understanding numbers, learning how to manipulate numbers, and learning maths facts. It is generally seen as a specific developmental disorder like dyslexia.
Dyscalculia can occur in people from across the whole IQ range, often, but not always, involving difficulties with time, measurement, and spatial reasoning. Estimates of the prevalence of dyscalculia range between 3 and 6% of the population. A quarter of children with dyscalculia have ADHD.


I, on the other hand, was minoring in mathematics until just recently when I hit a wall hard, and realized that differential equations were more trouble than it is worth for me to learn.

Both my wife and another friend have taken first or second year calculus.

All of us are intelligent people with the level of imagination required to desire to play a game of make-believe using dice and rules.

So why do I bring up math skills? Does this really have any bearing at all on the simple arithmetic needed to play Dungeons and Dragons?

Of course it does. Even if you discount the opinions of some of the posts on /tg/, a vile hive of scum and misogyny on 4chan, they are people that could be encountered in real life. Aside from that, I wonder how many potential players have been scared away from D&D because they have over heard or read someone saying people can't do simple math easily shouldn't be playing? And there other people who unknowingly make the assumption that everyone can easily do arithmetic in their heads, every couple of minutes, like every time their turn comes up in a combat.

Now me, I had actually forgotten my friend has dyscalculia until it was time to calculate the party's encumbrance before leaving the dungeon. She originally thought that me thanking her for reminding me that she has dyscalculia was sarcasm. That was kind of painful, but even worse makes me wonder how many times someone has mocked her, or other people with dyscalculia, for having a hard time with abstract math (ironically she works as a cashier and says she have no big problems making change).

Some non-/tg/ opinions about combat algorithms:


What is the Best Combat Algorithm?
The entire post and the comments are very interesting as Delta is pondering the what makes a best way the best way from the standpoint of someone who teaches college level math.


My D&D Was Different (Not Old or New But Middle School*)
This point in the post is the kind of attitude I am talking about (bolding mine):


Thac0 is easy. Seriously. Subtract your roll from your thac0 and that's the best AC you can hit with that attack. How the fuck is that difficult? It strikes me as much easier than rolling d20+34.

A question posted on the OSR G+ group
I'm not calling this guy out because he knows math is easy for him but not equally easy for everyone, just highlighting the kind of assumptions people have:


I think part of the problem I'm having is I'm good enough at the basic math that I can't figure out what's difficult for people.﻿

This raises the question:

How do we as game masters and players make our games open and inviting to people with dyscalculia? Or other learning or developmental problems?
Or is this even really a problem?
I know for me it is. I don't want people to feel they can't play our games because math is hard for them.
Which is the best combat algorithm?

To Hit Armor Class 0 (which has 3 general methods):
Target 20: Roll a d20, add ability modifiers, add level based combat bonus (base attack bonus or fighter level), add descending armor, compare to 20; if greater than or equal it is a successful hit.

D20 Method: Roll a d20, add ability modifiers, add level based combat bonus (base attack bonus or fighter level), compare to ascending armor class (which is generally 10 plus a bunch of other modifiers); greater than or equal to the AC it is a successful hit.

Calculators?
Play another game?
Don't play Exalted?
Let your playing group know that you have more difficulty with math than the baseline and would like help?

Figure out which method of determining success is the easiest? THAC0, Target 20, Ascending AC with BAB?

Don't play a game that tosses lots of bonuses and penalties around like 3.x or Pathfinder? Seriously who wants to constantly add half a dozen bonuses from 1 to 4 while making sure they do or don't stack?

allandaros answered: Having a matrix handy for “roll X, hit Y” is handy. Also, GMs should be able to help out with parsing combat math.

A successful raid on the bookstore

Anyone jealous? A complete and crisp Spelljammer box set. The ship counters haven't been cut out. 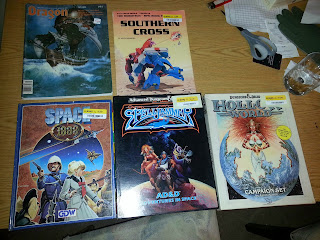 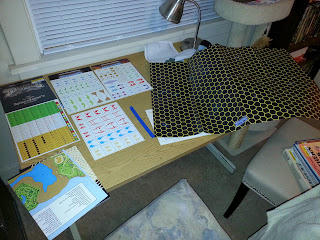 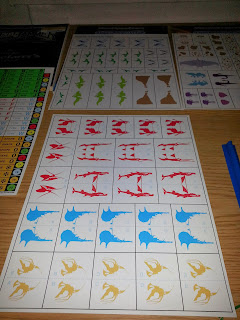 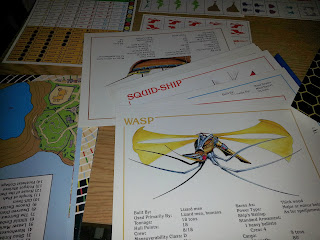 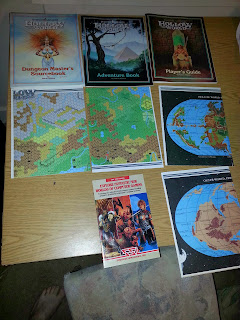 A few things I just really started thinking about with regards to monks.

Provided you, like me, view HP as something of an combination abstraction of physical health, luck and the continual improvement of avoiding damage, does it make sense for monks to have such small HD and an improving armor class, whether that means harder to hit or taking less damage?

I guess it might make sense as it does decouple the general and overall improvement to avoiding damage granted to other fightery classes, like fighters, signified by larger HD, making the monk possibly as survivable as a fighter in combat, but much frailer out of combat. 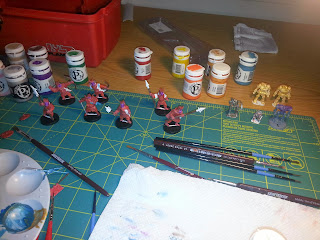 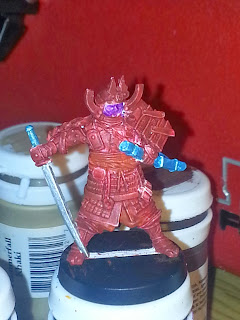 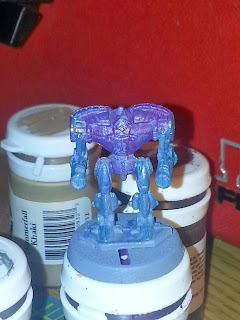 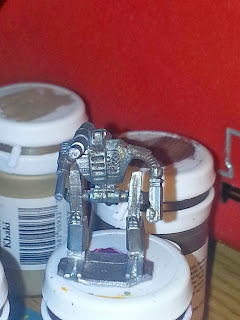 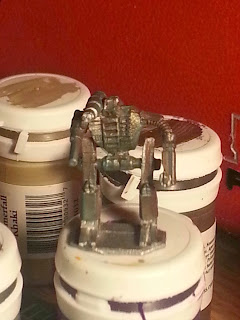 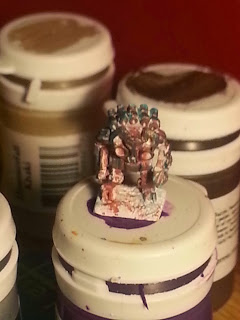 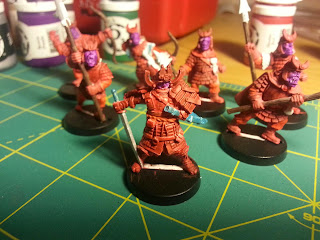 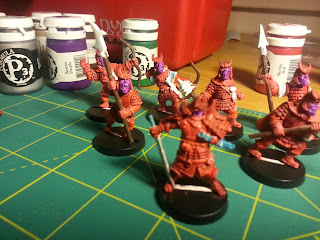 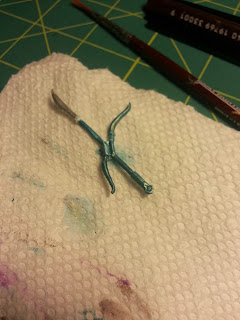 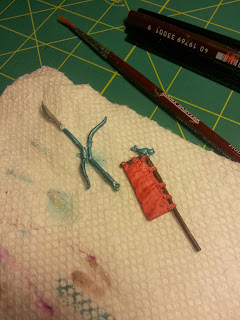 The 3rd and final leg of my first dungeon finished last night. The few fights that the party got into made the weapon damage tables unnecessary as skeletons don't feel pain or bleed.